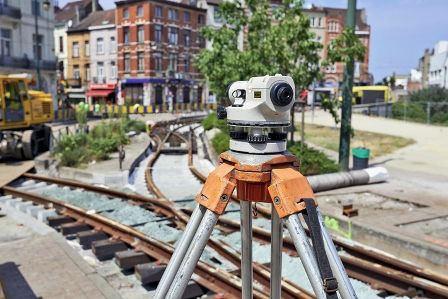 Railroad track profiles and topographic surveys deal with slope, curve and grade of the track and its surrounding areas.  These surveys are needed when new tracks are to be built, or when construction is being done that affects the use of the tracks, such as a new bridge, tunnel, or road that will cross the tracks.  These surveys will include features found on most surveys, plus some that are unique to railroad surveys:

Railroad right-of-way surveys are unique types of surveys that harken back to surveying methods originated centuries ago.  These surveys use historical records and track curve data from railroad surveys completed long ago, to establish original right-of-way.  Right-of-way issues become important when easements are requested for installation of utilities such as gas pipelines, fiber optic cable, and electric power lines.

Railroad surveys come with their own unique challenges and the surveying team doing the job must be experienced and well trained.  If you need a survey on or around a rail yard or railroad, please contact Votex Surveying Company at 469-333-8831 for an estimate on your surveying project.

ALTA/NSPS surveys and topographic surveys are two common types of surveys performed on plots of land. Both surveys provide important information about the land, and each survey is useful under different circumstances. Choosing between the two depends on what you intend to do with the property since each is intended to provide specific information. ALTA/NSPS … END_OF_DOCUMENT_TOKEN_TO_BE_REPLACED