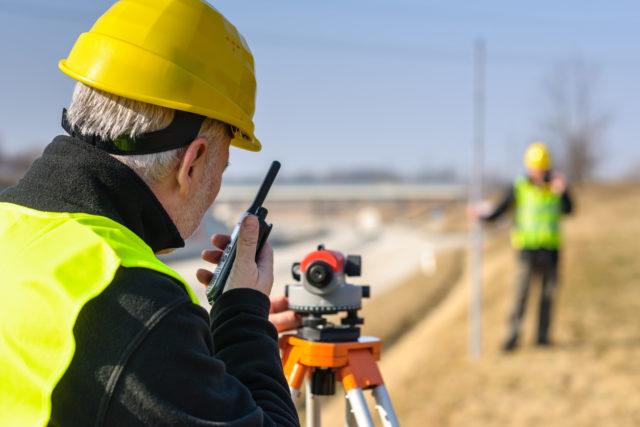 Surveys weren’t always as sophisticated as they are now. Years ago, when it came to making measurements for long, linear structures like roads, chains were used to mark the positioning of the road and measure its length. The word “chainage” is still used in surveying today, even though measurement methods have improved with technological advances.

The original use of chainage in surveying involved very low technology– a chain of 100 links. Invented in 1620 by clergyman Edmund Gunter, this method was surprisingly accurate for its time. Using a brightly colored pole placed at the end point (such as the end of a road) a surveyor would lay out the chain, starting from his position and heading toward the pole. A stake would be driven into the ground at the end of the chain. They would then repeat the process from the stake, so by the end, they’d have a straight line staked out on the ground.

Today, surveyors employ far more precise instruments and methods that account for slopes and irregularities, but the term “chainage” is still widely used.

The word “chainage” as used today indicates the centerline of a linear structure, such as a road or pipeline. It’s used in conjunction with “elevation” and “offset” to draw up construction plans. These terms are explained as follows:

A “chain” is used as a unit of measure, equaling 22 yards (66 feet), which was the length of Gunter’s chain.

While the old chainage method is antiquated, surveyors such as Votex Surveying Company still use chainage as part of construction surveys today.

ALTA/NSPS surveys and topographic surveys are two common types of surveys performed on plots of land. Both surveys provide important information about the land, and each survey is useful under different circumstances. Choosing between the two depends on what you intend to do with the property since each is intended to provide specific information. ALTA/NSPS … END_OF_DOCUMENT_TOKEN_TO_BE_REPLACED